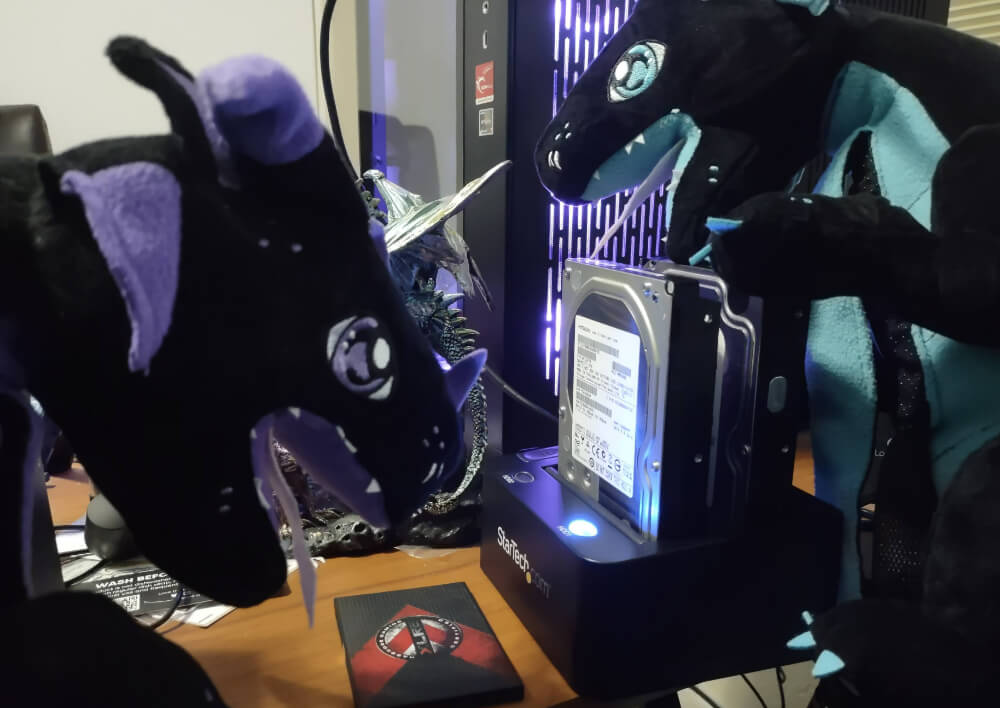 The almighty holding of data on a computer. From the old days of Mechanical Hard Disk Drives (HDDs from here on), it is a wonder how those small plates at times don’t try to harm us. Now we have Solid State Drives (SSDs) that run fast without the use of platters or high-speed discs.

Though today, sometimes some people have been given systems with either real low storage for a solid-state drive (maybe that was the affordable at the time?) or were still granted a Hard Drive which just isn’t as quick enough any longer. If those Hard Drives are your Operating System’s storage, perhaps you would think Windows is just plain slow. If you have the system that is capable from 2018 or if you’re planning to ride out through 2025 on Windows 10 and have a system between 2015-2018, perhaps a boost can be given with these systems. But are SSDs better beyond just speed?

Well Backblaze has done some research on reliability with SSDs in a data environment. They found that the average life span in a data center environment was 14.2 months instead of 14.3 months on regular HDDs. In many cases, you’re probably not going to use up all the life usage of storage before you must buy new tech.

This list is going to be tied into multiple categories for different reasons. Let it be known once again that any items you click on will be amazon paid links. So, without further ado, let’s check this out!

Is this a mistake? Nope. I know I just said there is hardly any use for this type of storage because it is slower. However, you may have a scenario where you just need a little extra either to put into your desktop computer as a spare drive of storage for data or just need it as an external to put into an enclosure and act as a reliable 2nd drive. Well then, I have just the drives for you. Be warned that I’m only listing 3.5” drives as I don’t see a good enough reason for a 2.5” drive when you have SATA SSDs available for that size (more on them later).

Western Digital is such a household name known for a very long time as the drives to go to. But why do we talk about them for a Hard Drive? Let us assume for a second that you are just needing some extra data storage and you just want to go as affordable as possible without the high-end performance. Look no further than these drives as they are generally standard and usually found in laptops that have HDDs in them. They aren’t performance driven in any way, but they are the best to hold files. If you’re talking about pictures, videos, and small files like word documents or spreadsheets, why not? If you’re talking about Programs, it does become questionable why you need to install onto a hard drive for the program. This way, you can go for what you need instead of the most out there.

This is the Performance version. Why do you need the performance? That is a good question. Perhaps you just need to store and move lots of large files. Perhaps you just want that extra bit for the second storage that just needs to exist for something. Hopefully, its not super important or I would recommend some NAS units.

This is the Performance version. Why do you need the performance? That is a good question. Perhaps you just need to store and move lots of large files. Perhaps you just want that extra bit for the second storage that just needs to exist for something. Hopefully, its not super important or I would recommend some NAS units.

Typically, HDD storage is going to fall into this category for a few reasons. It’s cheaper than SSD for starters and that alone is going to save quite a bit. Also, on good NAS systems, you may want some validation on drives that works, especially if for conformity reasons, you may just want to have all 1 particular set of brand (as opposed to mix and matching) so you have the support and the replacements that may have to come up all in one place.

Long ago, it used to be considered that Seagate was the poor-man’s storage solution. I never understood that one when I have 1 Seagate that has lasted through the times and well above where it shouldn’t. However, it has been reported that in terms of failure rate thanks to Backblaze’s reports, Seagate has a much more minimal failure rate in year-to-year use compared to years prior. That said, chances are you’re probably doing RAID setups where if 1 fails, you should be able to have the time to replace and keep going. Otherwise, we wouldn’t recommend this under NAS if you’re focusing on 1 drive only.

Western Digital is still a household name to this day. While it does offer more reliability and warranty, just remember that they are geared towards NAS use. If you want potentially fast and responsive storage for your NAS (and we assume you are going for multiple), you can’t go wrong with this. Also runs as well in various RAID Setups.

You might be asking why I am referring to “SATA” storage. The whole point we refer to is those square-like storage blocks that you can stick in and is the first SSDs before the newer and becoming more standard M.2. Don’t worry about the terminology, but just worry about the physical size. These can be just as effective for you if you aren’t looking to do serious work (such as Video editing, Picture work, etc). If you’re on a laptop, you’re either using one of these or something even smaller than this depending on what and when you bought. Even in pre-built Desktops, you might have something like this.

You will have to understand that Samsung is considered notoriously known for many things these days and they are the ones to lead with storage. They are considered by fans the “fastest” you will ever have. This is one of the long-lasting drives, but even the chip shortage has gotten to Samsung despite making most of their chips being in-house. But if you want to follow the masses, you can’t go wrong.

I can confirm without question that these are straight to the point fast storage. The more storage size you go, the faster that they tend to be. It is also considered the most reliable, even winning awards! You really can’t go wrong with this for either your only storage upgrade options or even just faster secondary storage if you prefer not a Hard Drive.

These are physically smaller and much newer hardware. They aren’t cutting edge so you will find them far more stable than previously found unless you’re talking about what they call “PCIe 4” and I will note those when it comes up. Those types will be meant for super performance driven, but if you’re not doing gaming or even super video editing, you probably have no need for those speeds. With that, lets explore.

There are 3 versions: The Evo, Evo Plus, and the Pro. What is the difference them? Honestly, speed and write capability/durability. It adds cost for each version above Evo, but the Pro line is for durability and write than speed (with speed being slightly less). Typically, from Samsung’s perspective, Professionals and Enterprises will use Pro. Generally, for all other cases, just go with the Evo Plus. Evo Plus is the balance between the 2. Just note that Samsung has faced some scrutiny because of the chip shortages and slightly lessening the performance they have.

This is the next version up of the 970 series. I know about the difference of Pro and non Pro, but given how fast and how hard these drives go for PCIe 4.0 work, you will want any edge of reliability as you can get. There is an option for Heatsink. I would get it the more you work with the drive. Also, if you’re thinking about using it as a second drive compared to what you already have, I would suggest not to do that as few systems that have 2 of these slots will have more than 1 that is capable of PCIe 4th gen.

Crucial once again gets added to the list. This is as reliable as their MX500 while having the best balance in speed and performance. Even though the 250GB is offered, for a few bucks more, you’re better off hitting the 500GB to start.

This is the newer speed setup of Crucial. It goes fast, but not quite as fast as other types try to claim. You will be paying a pretty penny for the higher end storage. But if reliability is what you’re aiming for while being on the fastest speeds capable on your system, then this is your product of choice. Also, if you’re thinking about using it as a second drive compared to what you already have, I would suggest not to do that as few systems that have 2 of these slots will have more than 1 that is capable of PCIe 4th gen.

If you need cheap and generally reliable storage, why not? They aren’t the absolute fastest, but they work. The more storage size you add however, the better they work and the longer lasting it is. Write-wise, they don’t hold a candle because of the type of storage that they are. But if you wanted to save some videos to be looked at or some other media types where Read speed is preferred, then this works very well in that regard.

For the true “I want speed” and your system can support it, this is a true beast with the promised reliability, but you’re paying a penny for it, much like the Samsung 980 drives. Though, I would stress that unless you plan to be working in extreme speed by having the most optimal computer and the intense of software, the prices may not make as much sense to the speed. Also, if you’re thinking about using it as a second drive compared to what you already have, I would suggest not to do that as few systems that have 2 of these slots will have more than 1 that is capable of PCIe 4th gen.